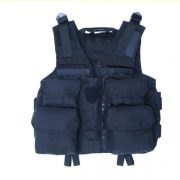 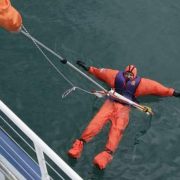 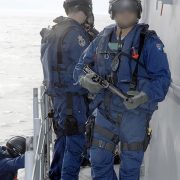 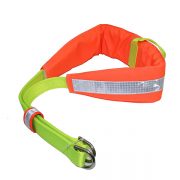 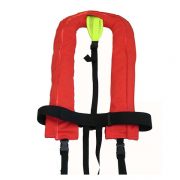 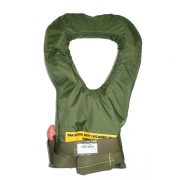 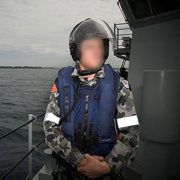 An Investment in Survival

In a man overboard situation, rescue organisations can experience problems both with their duty of care to the victim and their Occupational Health and Safety (OH&S) obligations to the rescuers.

First, if a vessel is nominated to be a rescue vessel it must be equipped to rapidly lift an exhausted, hypothermic or injured victim aboard in a horizontal posture. The horizontal posture is important to avoid the circulatory collapse that can occur if victims are lifted out vertically. This is called “circumrescue collapse”. If a rescue vessel lacks adequate equipment and if the victim were to die or be injured as a consequence, the organisation might be held liable for failing in its duty of care.

Secondly, from the rescuers` point of view the concept of `safe lifting load` requires close consideration. In a worse-case scenario, a very obese victim in waterlogged clothing could weigh close to 200kg.

Sea Scoopa: a new approach to an old problem

In the construction industry, a bag of cement weighing 20kg is widely regarded as a maximum safe lifting load. If this safe load is exceeded, back injuries with time off work and expensive compensation are possible consequences.
This is a special problem for Water Police and other agencies that are tasked with the difficult duty of manually retrieving waterlogged dead bodies from the water without the benefit of any mechanical assistance.

Around the world the majority of small rescue craft are rigid inflatable boats. They are ideal for this task being fast, manoeuvrable and stable with a low free board. The remainder are Power Boats that are better suited for ocean conditions but usually have a higher free board. Rescue crew numbers can vary but the majority of boats have only two crew members.

When it comes to lifting the victim on board, a great deal of strength may be required – especially if the victim is heavy, uncooperative, hypothermic or unconscious with waterlogged clothing. In many volunteer rescue organisations the personnel are in the older age group and may have various physical disabilities impeding lifting ability. Many are females who may have reduced upper body strength.

The device in its integral bag is attached to the same side of the boat as the steering station so the victim can be continuously sighted during the rescue.

The net is rectangular in shape with brightly coloured borders and reflective tape for enhanced visibility in turbulent water and low light conditions. The rigid outer batten has both a floatation pocket and handgrips for lifting. The crew hold this batten out from the inflatable with two fibreglass poles attached by flexible joints to its fore and aft ends to create the scoop.

The scoop configuration is created by the forward edge of the net being weighed down by 8 mm chain while the trailing edge is held at the surface by a taut rope in the aft pocket. The scoop is held at right angles to the boat by a foreguy running from the bow of the boat to the forward end of the outer batten.

The victim is then scooped into the net whilst the boat is in motion, preferably head first, at a speed of 1 knot to ensure steerage.

It is recommended that a rescue inflatable be fitted with an approved propeller guard to prevent propeller injury which could be fatal. Inflatable rescues are a high-risk situation as the propeller is in immediate proximity to the lifting area. Also unlike a powerboat, which has a rudder, the propeller has to be turning in order to steer an inflatable alongside the victim. For powerboats the engine must be put out of gear on final approach.

Once scooped and netted, the victim is manually parbuckled on board by two crew members, first using the handgrips on the outer floating batten and then the six sets incorporated in the body of the net. It is important that this is done in a sequential and coordinated fashion so that the load is evenly distributed.

This is surprisingly easy and the physics involved are very interesting. The parbuckle itself functions like a block and tackle and imparts a 2:1 mechanical advantage. In addition, with inflatables the crew weight causes a lean to the lifting side and the soft buoyancy tube becomes compressed by the victim`s body so that an inclined plane is formed. Kinetic energy is generated during the rolling motion created by the parbuckle while the body is almost weightless in the water and this assists in continuing to roll the body up the inclined plane out of the water and into the cockpit.

With power boats the extra free board requires more effort in the final stages of lifting and also poses the additional problem of lowering the rescued victim from the gunwale to the cockpit floor. This is achieved by rolling the victim into a lightweight stretcher attached to the net.

The outer pole of the stretcher is supported during this process by clipping onto the D ring on the harness of the rescuers` life jacket.

1. First and foremost it plucks the MOB out of the water whilst the boat is in motion and has steerage, and the unique patented SCOOP shape of the net prevents the victim being swept out of the aft end. This is unlike the situation that occurs with a cradle, lifting net or rescue frame where the aft end is open.

2. The MOB is lifted in a horizontal position and the 2:1 mechanical advantage of the parbuckle reduces the risk of back injury.

3. There are no large apertures which can lead to limb entrapment and consequent risk of drowning in difficult circumstances.

4. There are no non-cushioned, rigid components that can inflict injury.

5. The net encloses and conforms to the whole body and minimises the risk of the victim falling out during lifting.

6. The apparatus, in its compact, lightweight bag, can be simply attached to the majority of commonly available rescue vessels.

7. It requires only 2 crew for the whole rescue operation.

8. The victim can be ‘stretchered’ immediately during the rescue, which greatly facilitates further handling.

9. There is absolutely no need for a rescuer to enter the water during the retrieval.

10. The device has been NATA tested to a Royal Australian Navy standard and is certified to lift a load of 300 kg.

11. After thorough testing by the Royal Australian Navy the Sea Scoopa has been awarded a NATO Stock Number, thus making it available for other navies to purchase.